As well as the families poor treatment of the dogs, the thieving habits of Carlos continued for the whole time that we were living there, and he was like a magpie in terms of the useless shit that he would steal. We were in his small house using the internet with his permission and he hadn’t even bothered to hide the stuff that he had stolen.

He had books in English which he didn’t speak or read, two printers that weren’t even used, first aid supplies also in English and most bizarrely my used pink razor that I had left in the shower. Not long before I left he went into my bedroom and stole my meagre wages that were between the pages of a book. I resented the fact that I couldn’t do anything about it and that he was happy to lie to my face day after day about various things. As trust is really important to a working relationship it made the job much more difficult.

Despite his flaws, he was still getting some in the shape of an American girl who was volunteering at a school nearby teaching English at a school run by a guy called Nick who I think was Scandinavian. I don’t know why they were teaching English to kids who lived in the jungle, especially as they were rapidly abandoning Qichwa for Spanish. I really don’t know what she saw in him but she kept on ringing him when she was back in New York.

Teacher Nick was banging the eldest sister in the family who had a young son. I can’t remember her name but I know she didn’t have many teeth. The younger sister really fancied Rob, one of our volunteers and used to come up dressed up to the nines to try and flirt with him. I think all the heat and moisture in the air of the jungle just really makes everyone want to bang each other.

Despite the various aggravations that came with maintaining our relationships with the family, the jungle is a fantastic place to live in a myriad of ways, one of these is that you just don’t quite know what is going to happen next.

You can imagine how thrilled we were when we found a worm the size of a snake, which we imaginatively christened the wormsnake. These giant worms are also found in Australia and they can grow up to 3.4m in length, which I would not have believed had I not seen it with my own eyes. We saw two that day and Carlos told us that once they had travelled along the surface it would damage their skin and they would die. He also told us that they can spit acid as a defence mechanism.

Some other animals which had the ability to create absolute havoc were the six peccaries that had an enclosure on the far side of the sanctuary grounds. The territories of the peccaries smell so strongly to humans that they have rightfully earned themselves the nickname ‘skunk pig’. They are used by locals for meat and their skin is used for leather gloves, however, catching them can be risky as they are notoriously vicious. There are reports of these wild pigs injuring people in a Bolivian national park which made their tendency to escape even more worrying.

At periodic intervals, they would trample down the inadequate fencing around the mud bog where they lived and go on the rampage, as soon as someone had shouted ‘Peccary’ everyone would climb up trees or jump on top of cages to avoid the stampede. There was a good reason for this fast reaction as peccaries are more than able to break bones with their strong jaws. We would soon get the brooms and sticks and herd them back into their pen which was usually a farcical process executed with very little skill as we had little experience in this area of animal husbandry.

The sad thing was that the animals were so institutionalised that when they escaped they never really went anywhere and would often be found in a tree next to their cage scared to death with the dogs at the bottom barking at them.

I have to say that I would have been more than happy for one of our furry Houdini’s to escape and never come back as it was their natural habitat, unfortunately, this never happened. I had one highly domesticated Capuchin called Elvis who had been brought up like a baby and identified with human behaviours to the extent that he would try to curl up in your arms and walk around on two legs. I remember he walked out of his cage when I wasn’t looking and before I knew it he had walked back, it was really fucking depressing.

More depressing was our breeding population of squirrel monkeys who had been released into the wild, needless to say, that they hadn’t gone anywhere and I still saw them every day with the two babies they’d produced since leaving their cages. They would divebomb us on choice occasions and use this as a prime opportunity to urinate on us or give us a nip before stealing some food (usually bananas) and leaping back into the trees. I was once pounced on whilst stood precariously on a bench to get out of the path of a passing coral snake meaning that I narrowly missed landing on it, which again would have defeated the idea of the rescue centre.

So yes, they were a pain in the neck but absolutely gorgeous and they are popular with exotic pet owners as they are considerably less insane than capuchins and more manageable in comparison. This common species are born survivors and very adaptable so the populations do well, the only squirrel monkeys that are listed as vulnerable are the Central American and the black squirrel monkeys.

The world’s most famous squirrel monkey was named Miss Baker and she was launched into space for 16 minutes wearing a tiny helmet. She was accompanied by a rhesus monkey named Miss Able as well as Neurospora fungi, blood samples, E. Coli, onions, mustard, corn seeds, Drosophila, pupae, yeast and sea urchin eggs and sperm. The monkeys really enjoyed their picnic and they thanked NASA profusely for this bouquet on their return.

The rhesus monkey died four days later and her surgeon Colonel Robert Hullinghorst said at the time said of her death ‘We don’t know exactly why it occurs.’ As this was after an operation to remove electrodes using anaesthetic I would probably say it was due to being sent into space and then pumped full of drugs, not to mention the fact that she was after all a monkey and not a bloody astronaut.

Miss Baker lived for 27 years and earned herself the title of longest surviving squirrel monkey. After her flight, she was awarded a Certificate of Merit for Distinguished Service by the ASPCA aka the ‘thank you for not adding to our monkey graveyard we’ve run out of space’ award. Obviously, official documentation that rewards achievement means a lot to primates so she was really chuffed when she received it.

She also enjoyed reading the 100-150 letters that she received from children at her space centre home. She was married twice, the first marriage was to Big George and the second was Norman. My theory was that she died because it was the only way to escape the fact that she was surrounded by idiots.

Another monkey species that we had was a single red titi monkey, he was a great big ball of fluff and he was very popular with the volunteers but he was depressed and lonely as they live in pairs in the wild. He would seize the opportunity to groom anyone who entered the cage but he was completely insatiable and removing him from your head after you had cleaned the cage was quite difficult to do, and I was bitten a few times for giving him the nudge. Titi monkeys are scientifically interesting as they mate for life which is unusual for monkeys who are rampant by nature and the father raises their young. I also read that they sit together with their tails intertwined which is unbearably sweet.

In fact, the bushy-bearded titi monkey was only rediscovered in 2008 as the expedition was halted due to political strife in Peru. This is a recurring problem for scientific researchers as some areas of Latin America are unavailable at different times due to problems with political issues or drug cartels. However, recent scientific findings have been impressive as in a biodiversity survey from 2009-2011 there were eight new mammal species found in Tabaconas Namballe National Sanctuary in Northern Peru.

They discovered a new species of night monkey, a common shrew opossum, an enigmatic porcupine and a new species of small-eared shrew amongst their findings. Despite not being entirely sure what is enigmatic about a porcupine with extra long spines this is an incredibly exciting discovery, which makes me very jealous of scientists for having such a valuable job, albeit one which I imagine comes with many frustrations.

So back at the centre, it was coming to the end of our month of volunteering and it was time for some decision making. As I had some experience with animals and she was returning home for a wedding, Helen asked me to look after the rescue centre in her absence.

This had a knock-on effect on the trip as Steph and I planned to go and meet my dad and brother in Texas to watch Wrestlemania. The extra time at the centre meant that I had to cancel that and it also meant that Steph and I were going to go our separate ways.

Ultimately she wanted to go to the USA soon to meet another friend and I wanted to stay in Ecuador with the animals, travel and improve my Spanish. I was in no way ready to leave South America yet. I loved it here.

At this point, we’d spent 7 months together, all day every day, every damn day. We were pretty sick of each other and our agendas had changed so we went to Quito and parted ways. I went to learn Spanish and then returned for one last stint at the rescue centre. 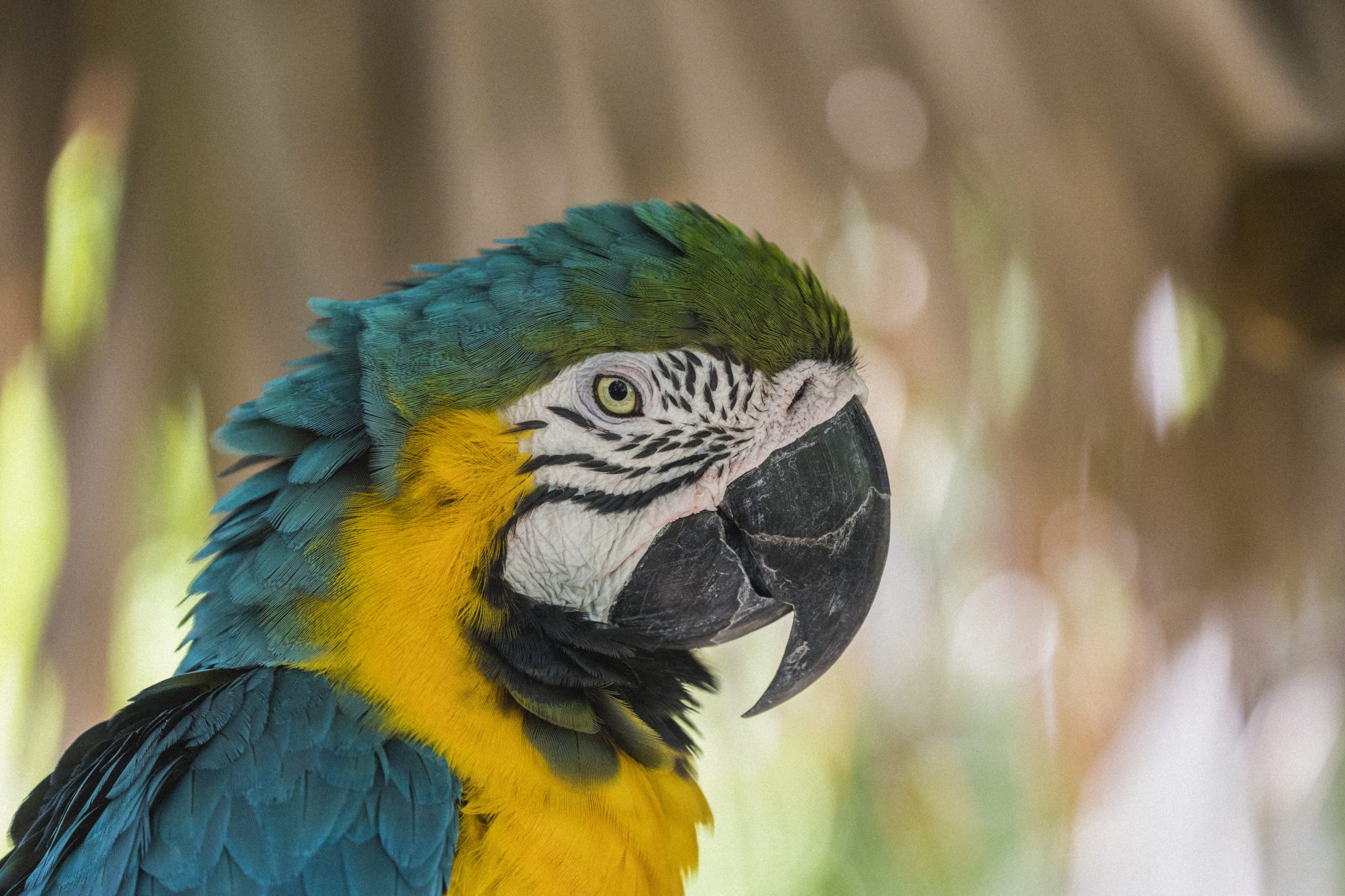