When I wrote this chapter on my phone it autocorrected to ‘Macchiato Picchu’. This says it all really, as the service you get on the Inca Trail trek is amazing. Your food is cooked, tents unpacked and essentially all you need to do is walk. As long as you can put one foot in front of the other then you can do this. If it weren’t for the altitude and resulting sickness then the whole thing would be a piece of piss for any vaguely healthy person.

Saying that the altitude did get to me, I was constantly thirsty, needed the toilet, had a cotton wool mouth and my walking pace was much slower than usual. Of course, it doesn’t get to everyone, Steph was fine and she zoomed on ahead like a trooper.

We went on the Inca Trail just before its annual closing for a month in February for maintenance. Because we had rushed the beginning of our Peru trip to get to Cuzco in time this had made my sickness worse. Other trails are available but I’ve heard varying reviews from travellers, I know one trail follows the train line, which isn’t ideal. Yes, a train line goes to Machu Picchu, depressed yet? Good for old and disabled people though.

The benefit of the Inca Trail is that you see other Inca monuments along the way to the big event, and you get to Machu Picchu moments before the other tourists arrive. Soak up that time while you can, before the Argentinians arrive and start screeching loud enough to make the ruins shudder (now we all know I how much I love Argentinians, but this cannot be denied).

In terms of the trail, the second day is the worst as it has the steepest pass (everyone will tell you that – one girl has to be given oxygen on this day which was a bit of an extreme case as I can assure you that doesn’t happen to everyone!). The company that we were with had porters decked out in red uniforms who were nicknamed ‘the red army’. Our guide used to heckle them when they stormed past us despite having chairs, tables and sacks of rice strapped to their backs (if you tip anyone in SA make it these guys).

Luckily they spoke Quechua and they just ignored him. Another of our guide’s bad habits was that when he arrived at an Inca ruin he would play his flute until the whole group reached him so he could regale us with historical facts and his own brand of random anecdotes. We all wanted to snap that damned flute after four days but it was certainly atmospheric.

The first ruin that you come across is Llactapata, which means ‘high town’ in Quechua. This site is believed to have been used as a religious shrine on the way to Machu Picchu.

It was ‘discovered’ by Hiram Bingham in 1912, presumably, local people knew it was there. Excavation attempts were apparently marred by the presence of highly poisonous snakes that live in the area. The best bit of this set of ruins is the view that is if you can see through the mist.

On the second day, you visit Runkurakay, which is thought to have functioned as a rest stop or some form of inn for those walking the Inca trail. It has perfectly circular fortifications, which is very pleasing.

On the third day, you see Sayacmarca, also known as the ‘inaccessible town’ as you can only reach it by walking down 98 stone steps down the mountain. Half of the site is a sun temple and the other half is a residential area. It was originally built by the Colla people and then adapted by the Incas.

The next ruin is Phuyupatamarca and the interesting thing about it is that it is largely intact and even more incredibly the irrigation system still works. The name means ‘town in the clouds’ which would probably serve as a good name for most of the ruins. We camped right next to it so I drank a beer and enjoyed the view, which was lovely.

On the day of Machu Picchu, we all got up early and headed to Inti Punku (aka the sun gate). When we first reached the gate all we could see was clouds and then miraculously they cleared. And there it was. Machu fucking Picchu. We had almost completed the Inca Trail. There was a sacrificial rock that we lay Steph on as the youngest and therefore most ‘virginal’. No comment.

I found out some interesting facts about the demographics of people that hike the Inca Trail (this is not including the other trails that are available). The largest proportions of tourists that visit are of Argentinian nationality at 19% followed by citizens of the US at 12%. Slightly more men than women hike the trail with a 50.8% compared to 49.2% females. The oldest recorded hiker was 84 and his name was Alan Goldin. The majority of the hikers (78%) are between the ages of 21-40.

Our guide told us that a father and son made the trek together and on the third night the father died in his sleep. What an incredible setting to draw your last breath and how sad they couldn’t have completed it together.

One annoying fact about MacPic is that it was damaged during a beer advert. Cusqueña beer smashed into the ancient sun clock with a crane – and we all though advertising was a really great thing. Agency J Walter Thompson blamed it on a ‘mechanical failure’. More like a brain failure.

Machu Picchu is one of the Seven Wonders of the World along with the Pyramids of Giza, Cristo Redentor, Chichen Itza, Petra, the Great Wall of China, the Coliseum in Rome and Taj Mahal, and yes that is actually eight wonders. It certainly deserves its place.

It is a place hard to describe in words but UNESCO has summed it up thus: ‘the Historic Sanctuary of Machu Picchu is among the greatest artistic, architectural and land use achievements anywhere and the most significant tangible legacy of the Inca civilisation’.

So there you have it, it is also worth mentioning that you can get a Machu Picchu stamp in your passport if you’re into that kind of thing. I thought that I was too cool to do this but I looked in my passport recently and it was there so I clearly wasn’t.

If you’re daring then you can climb the very steep Huayna Picchu, which is that mountain you can see behind Machu Picchu in the photos. You have to get in quick though as the numbers that can go up it every day are limited. I didn’t go up as it was far too steep and scary for me and Steph didn’t go up it either, which was surprising as she was much better at physical challenges than me.

The name is thought to mean ‘young peak’ and it was partially built up by the Incas for terraces. There is nothing an Inca loves more than a terrace except perhaps bloodshed. The stairs they cut out are lovingly known as ‘the stairs of death’ and your reaction to that nickname would go some way to determining whether you’re the right sort of person to climb it.

These stairs were used in the Werner Herzog film Aguirre, Wrath of God, a screenplay that he wrote on a bus with his football team. The team subsequently got drunk and vomited on several of the pages. His reaction was to throw those pages out of the window, but if it were me I would have scraped the sick off and dried them on the radiator. Rewriting is not my forte as you have probably learnt at this point.

Nowadays you can buy a selfie stick at Machu Picchu so I’ll let you think about that for a second.

We got the train back to the Cuzco for a well-deserved wash and a few of the group went to Aguas Calientes to enjoy the hot springs. Our group weren’t really party animals, which was a shame. It was an anti-climax when we got back to Cuzco and nobody was up for a night out at Mama Africa.

I wanted to leave Cuzco straightaway and get back to sea level but Steph wanted to stay purely to upload her pictures, which was annoying for me. I still felt ill and another night in the dreaded hostel was not what I needed. The next day we left for Lima and even though Cuzco is a great and interesting place it’s just too far into the sky for me. 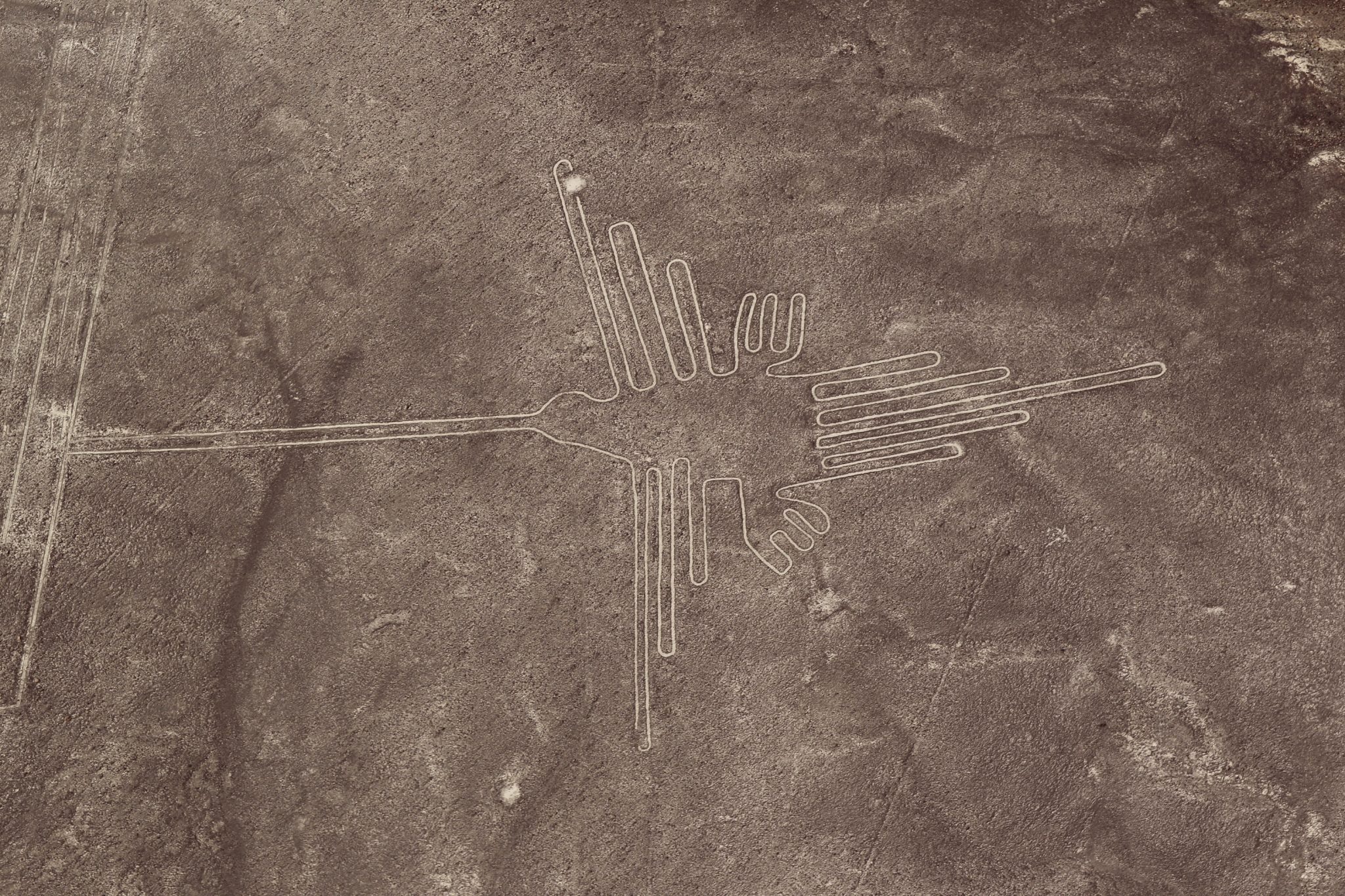 Why are the Nazca lines such a big draw?